A Response to Phil Robertson's ordeal

In the onslaught from Duck Dynasty comments in my FB news feed this morning, this passage from 1 Peter 4 came to mind.

"12 Beloved, do not be surprised at the fiery ordeal among you, which comes upon you for your testing, as though some strange thing were happening to you; 13 but to the degree that you share the sufferings of Christ, keep on rejoicing, so that also at the revelation of His glory you may rejoice with exultation."

I choose not to complain, gripe, or claim to be a Christian victim. I choose to keep on rejoicing, fully expecting the same fiery ordeal myself one day. I suspect Phil is saying something like, "No biggie, God told me to expect this. God's got this covered." By faith, I do believe God has got this covered. I believe a smile is my best response. What do you believe? 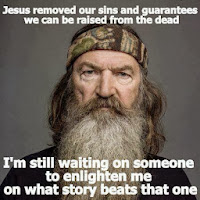 As a post script due to some responses to my article I have posted the following on Facebook:  "Please don't mistake my smile for silence. I do hereby (as many times before) publicly oppose all sexual immorality including but not limited to homosexual acts, acts of lesbianism, polygamy, acts of premarital sex, acts of extramarital sex, acts of bestiality, acts of pornography, married couples with holding sex for unholy reasons unlike fasting and prayer, and any others listed in the Bible. I do also take Peter's words to mean that I will not react with outrage declaring Christians as victims by uttering words of anger, vengefulness, and bitterness. I think Clay summed my reaction best in the Duck Dynasty mantra of "Happy, Happy, Happy." This doesn't dampen my joy."
at 8:49 AM
Email ThisBlogThis!Share to TwitterShare to FacebookShare to Pinterest