Patrick Lankford wanted us to join him in a "No Shave November."  When we upped the ante with "Nazarite Vow November," he was all in!  So, rather than not shaving or cutting your hair in fall months, let's do what "Nazarite" really means.  Devote ourselves to God! 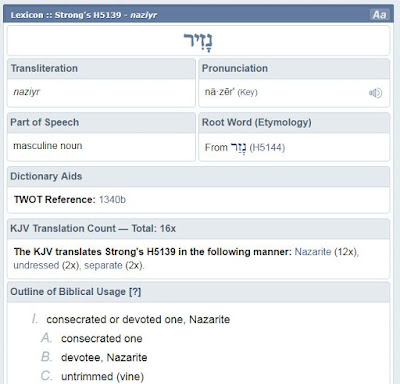 So, what would it mean to take a Nazarite Vow today?
Like the Nazarites we would:

So, if you want to do more than "No Shave November" to consecrate yourselves to God, simply let Topher or Patrick know, we'll be happy to walk through a modern day Nazarite Vow together.  We'll talk later about what our Saturday, December 1st will look like later.


By: Executive Committee of the Editorial Board., George A. Barton, Ludwig Blau

Three restrictions are imposed upon the Nazarite, according to Num. vi.: he may not take wine, or anything made from grapes; he may not cut the hair of his head; he may not touch the dead, not even the body of his father or mother. If a Nazarite has become unclean by accident, he must offer a sacrifice and begin the period of his vow anew. He is "holy unto the Lord" (Num. vi. 8), and the regulations which apply to him actually agree with those for the high priest and for the priests during worship (Lev. x. 8 et seq., xxi.; Ezek. xliv. 21). In ancient times the priests were persons dedicated to God (Ezek. xliv. 20; I Sam. i. 11), and it follows from the juxtaposition of prophets and Nazarites (Amos ii. 11-12) that the latter must have been regarded as in a sense priests. Young men especially, who found it difficult to abstain from wine on account of youthful desire for pleasure, took the vow. The most prominent outward mark of the Nazarite was long, flowing hair, which was cut at the expiration of the vow and offered as a sacrifice (Num. l.c.; Jer. vii. 29).
In Ancient Israel.

The history of Nazariteship in ancient Israel is obscure. Samson was a Nazarite, whose mother abstained from wine during her pregnancy. His superhuman strength lay in his long, unshorn locks (Judges xiii. et seq.). Samuel's mother promised to dedicate him to God during his whole life, saying, "There shall no razor come upon his head" (I Sam. i. 11); the Septuagint concludes from the latter promise (to which it adds "he shall drink no wine") that Samuel was a Nazarite. Neither the nomadic Rechabites nor their wives or children drank wine (Jer. xxxv.; II Kings x. 15 et seq.).
Extent.—In Rabbinical Literature:

The Nazarite law was minutely developed in post-Biblical times and became authoritative, while the popularity of Nazariteship and the influence it exercised on men's minds appear from its numerous regulations, which form a voluminous treatise of the Mishnah, and from the many expressions and phrases accompanying the taking of the vow. If one said, "May I be a Nazarite," he became a Nazarite at once (Naz. i. 1). As a consequence of the universal custom, peculiar words and phrases, some of which are now unintelligible, were formulated for the taking of the vow (Naz. i. 1, ii. 1; p. 10a; Ned. 10a, b, et passim). "'Let my hand, my foot be nazir,' is not valid; 'Let my liver [or some other vital part] be nazir,' is valid" (Naz. 21b; Tos. to Naz. iii. 3). When the sanctuary was defiled at the time of the wars of the Maccabees the people assembled all the Nazarites before God as persons who could not be released from their vows (I Macc. iii. 49); yet when Nazarites returned from the Diaspora and found the sanctuary destroyed they were absolved from their vows (Naz. v. 4), although at the same time others took it (ib. v., end).
The expenses of the offerings of poor Nazarites were borne by the wealthy, this charitable obligation being expressed by the phrase "to have [his head] shorn"; and King Agrippa had many Nazarites "shorn" (Josephus, "Ant." xix. 6, § 1; Naz. ii. 5, 6; Acts xviii. 18; xxi. 23, 24 [Nazariteship ofPaul]). "At the time of R. Simeon b. Sheṭaḥ 300 Nazarites came to Jerusalem. In the case of 150 he found a reason for annulling their vows, but in the case of the others he found none. He went to his brother-in-law King Jannai [103-76 ] and said to him: 'There are 300 Nazarites who need 900 sacrificial animals; you give one-half and I will give the other half'; so the king sent 450 animals" (Yer. Ber. 11b and parallels). Noble persons also, both men and women, took Nazarite vows. Queen Helena was a Nazarite for fourteen (or twenty-one) years (Naz. iii. 6; see  vi. 334, s.v. Helena), and Agrippa's sister Berenice was at Jerusalem on account of a Nazarite vow taken before the outbreak of the great war against the Romans (Josephus, "B. J." ii. 15, § 1).
at 10:39 PM
Email ThisBlogThis!Share to TwitterShare to FacebookShare to Pinterest
Newer Posts Older Posts Home
Subscribe to: Posts (Atom)