As I pen this Family Forte article I find myself sitting at the table in an RV parked in Jamestown, OH, a bustling cornfield metropolis of less than 2,000 people.  How did I wind up here?  The story begins with an oft repeated dadism, “Brothers don’t hit or hurt each other, but brothers handshake, help, and hug each other.”

About three years into my foray as a father, I was thrown a curveball with my strapping young second son, Ethan.  Being two years younger than Gabriel, his secondborn nature showed a stronger and dominant demeanor.  As the two boys grew, they would often get into tussles with Ethan showing physical dominance over Gabriel who showed restraint.   Many scraps would end with the younger hurting the older and I realized my challenge as a dad was to teach these boys that they were not competitors, but that they were cooperative teammates. So as a father I laid down two ground rules to aid in the development of our family.

The first rule was that the boys were never allowed to wrestle or box with each other, but only cooperatively against me.  Having been a high school wrestler and taekwondo student, I could allow the boys to test their physical strength with me in ways that challenged them but didn’t hurt them. Our wrestling matches on the bunk beds were epic events that often left my wife laughing over the organized chaos that ensued. A marvelous result of these cooperative wrestling matches that pitted Gabriel and Ethan against me was that they decreased their striving against one another focusing instead on working together toward my demise. We liked the result of the first ground rule and simplified it to, “Brothers don’t hit or hurt each other.”

The second rule that I laid down from dad authority was that the boys were to focus their lives on agreement rather than differences, aid rather than aggression, and encouragement rather than trash-talking.  As they learned to compete with me, I directed them to focus their energy on encouraging one another on their successes, helping each other learn from mistakes, and ending each competition with respectful handshakes and hugs all around.  I distinctly remember one meaningful moment when this rule played out.

For a few years in sparring matches the boys were never able to land a single strike on me so I never wore a helmet even though I required protective gear for them.  My unprotected head learned a valuable lesson the day our sparring session ended with me blocking Gabriel’s roundhouse kick to the ribs followed by Ethan executing a textbook spinning backfist to my left temple, surprising me by the blow and bringing me to a knee to recover. As I shook my ringing head clear, I was blessed to witness Gabriel jubilantly high-fiving Ethan and hugging him all while verbally praising him for his deftly delivered shot. In return Ethan congratulated Gabriel on the perfectly planned roundhouse that caused me to drop my high guard for the session ending blow.  It was a proud dad moment for me seeing our second rule play out.  We simplified the rule to the short phrase, “Brothers handshake, help, and hug.”  FYI, I now wear a helmet when we spar.

Brothers don’t hit or hurt each other, but brothers handshake, help, and hug each other. This engrained mantra has grown beyond my now 11 and 13 year old boys to include the church in my life as well.

I believe that church is not an event but the church of Christ is a family.  That makes the men and women who are fellow believers and followers of Jesus Christ my brothers and sisters. The Bible is very purposeful in describing how church family should treat one another when it sums our conduct up in Peter’s first letter.  “Having purified your souls by your obedience to the truth for a sincere brotherly love, love one another earnestly from a pure heart, since you have been born again, not of perishable seed but of imperishable, through the living and abiding word of God.” – 1 Peter 1:22-23.

While the world struggles with complaining, grumbling, and nefarious methods of treating others, the family of Christ has demonstrated to me what true brotherly love looks like. When my children were born, Godly brothers in Christ were at the hospital to hug, handshake, and high-five my moments of joy.  When an acute back injury saw me struggling as my family moved to from Washington, IN, it was the brothers in Christ who showed up as working army helping move all my belongings into our new home in Sparta, TN.  When I made mistakes in life, my true brothers weren’t quick to deride or trash-talk me, but they strove to direct and guide me back toward God’s lighted path.  My church brothers don’t hit or hurt each other, but my brothers handshake, help, and hug each other.

Thus I find myself in a motorhome parked in the middle of the cornfields of Jamestown, Ohio awaiting the outcome of a brother’s nearby back surgery.  This believer in Christ was quick to aid the Central Church of Christ family with many hours of volunteer labor in 2020. But life changed and his back necessitated a surgery in central Ohio. Our family in Christ responded by driving a motorhome with a comfy and safe bed for prone transportation of our recovering brother from the Ohio hospital back to Sparta for his continuation of recovery.  In life we’ve learned that the size and type of family does not matter, but what does matter is that brothers don’t hit or hurt each other, but brothers handshake, help, and hug each other through life's challenges.  As you strive to build your family’s forte, may this dadism bless you as it has me. Sparta, we'll see you soon.

“For whoever does the will of my Father in heaven is my brother and sister and mother.” – Matthew 12:50 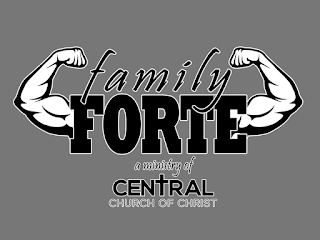 at 4:55 AM
Email ThisBlogThis!Share to TwitterShare to FacebookShare to Pinterest