Family Forte: Are There Angels Among Us?

She had tears glistening in her eyes no doubt beginning from the deep pits of worry and concern that have wracked much of our community in the last few weeks.  In that one moment, she made a statement made my hair stand up and made my brain think hard about a Bible topic.  She said, “You guys are angels.”

What began with a shortage of toilet paper (I’m still trying to figure that one out) and progressed  to electrical outages caused by 95mph wind damage (and a tornado) probably had an effect on her while we stood on her doorstep (6 feet apart mind you) and caused the floodgates to open (no, I’m not talking about the dam break in Monterey).

Many of you are like our new friend we met in the community.  You’ve been stressed by work hours being cut short causing you concern over finances.  You’ve been bombarded with the everchanging news of the Covid-19 media feeding frenzy.  Your kids are going stir crazy being at home making you want to lock yourself in the bathroom since you can’t go sit at Scoop’s newly reopened ice cream shop.  The text message alert systems of severe weather or dam bursting floods are setting you on a razor thin edge in which you find yourself teetering between the emotions of fear and apathy toward all that is going on.  On a more serious note, you may be stressing because you are one of the ones who have been on complete quarantine in our community because you tested positive for Da ‘Rona. You may have that aging loved one who was admitted to the hospital that you aren’t allowed to go in to help, keeping you sitting on pins and needles while you wait for news.  You may have that dear sweet grandma or grandpa who is at a nursing care facility that is on full lockdown, meaning you can only speak to them through the windows outside, if at all.  The straw breaking the camel may be that you can’t go sit in a booth at El Tap to drown your sorrows in that delicious chips and salsa that makes your stomach full and your heart glad.  Yes, there is enough stress to go around right now; enough to produce tears.

What may have begun as tears over concerns changed to tears of joy as this woman considered the people helping her to be personal angels.  Now, most of the time our culture has so twisted the Bible’s words about angels that we have completely gotten it wrong.  Sometimes you visit a home full of collectible angels fashioned after babies donning soft and fluffy white feathery wings or effeminate winged beings robed in billowing sheer white gowns.

Yet, the Bible describes them in a very different way than the Angel Soft bathroom tissue commercials.  It often describes angels as having flaming swords, multiple heads, six wings, faces like lightning, eyes like flaming torches, arms and legs like the gleam of burnished bronze, or a voice like the sound of a multitude.  Then the book of Hebrews drops a different bombshell on us when it says, “Do not forget to show hospitality to strangers, for by so doing some people have shown hospitality to angels without knowing it.” (Hebrews 13:2)

That’s right, you might just be getting help from angels and not know it.  In the New Testament, the Greek word, “angelos” is translated 179 times as “angel” and 7 times as “messenger”.  In the Old Testament, the Hebrew word “mal’ak” is translated 111 times as “angel” and 98 times as “messenger”.  That’s right, 26% of the time, our Bible translations choose the word “messenger” over that word that conjures up visions of flaming swords and faces like lightning.  Often the words “angelos” and “mal’ak” are used to talk about human messengers acting in God’s interest as well, such as that time in Luke 9:52 when Jesus sent his disciples ahead of him into a Samaritan village calling them his “angelos”.

Maybe you have been doing just what the Bible says in Hebrews 13:2. Maybe you have entertained messengers of God unaware.  Perhaps they didn’t have flaming swords or lightning faces, but maybe they did wave chainsaws at trees leaning up against your house, or they paid for your rent for a month when your job hours were cut short. Maybe they bought you a new refrigerator when you were quarantined and couldn’t go out, or they put on a facemask and scrubs to take care of your aging loved one in the nursing facility.  Perhaps they gave you a box of food and prayed for you, sharing with you the grace and the hope of God’s word through action and love.   This woman had tears in her eyes, not because of all the fear inducing stress that has been thrown into our community lately, but because she was convinced in her mind that she witnessed angels ministering to her that day.

If your family is feeling stressed in this time, I highly encourage you sit down and talk about all the angels of God’s grace that you’ve seen lately.  Looking for those helping messengers will strengthen your family faith in the tough times.  That’s the same sentiment shared by Nancy Rogers to her son, Mister Fred Rogers, who passed it along to America in his syndicated newspaper column in 1986 writing, “When I was a boy and I would see scary things in the news, my mother would say to me, ’Look for the helpers. You will always find people who are helping.’”  Mister Rogers continued by writing, “I did, and I came to see that the world is full of doctors and nurses, police and firemen, volunteers, neighbors and friends who are ready to jump in to help when things go wrong.”  (source)

Friends, in tough times look for the helpers, the messengers, and the angels God sends your way.  You’ll be glad you did. 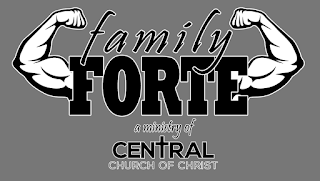