On Wednesday mornings I teach a class to our "Prime Time Group".  Today is about James the Greater.  Here's a list of the scripture, but first, I'm throwing in my song list for the morning.  These are some of the verses I have of James mentioned in addition to all the experiences he had with the other twelve disciples. 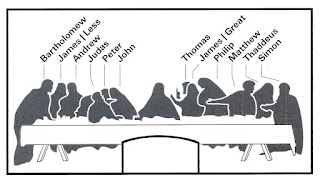 Mat 4:18  While walking by the Sea of Galilee, he saw two brothers, Simon (who is called Peter) and Andrew his brother, casting a net into the sea, for they were fishermen.
Mat 4:19  And he said to them, “Follow me, and I will make you fishers of men.”
Mat 4:20  Immediately they left their nets and followed him.
Mat 4:21  And going on from there he saw two other brothers, James the son of Zebedee and John his brother, in the boat with Zebedee their father, mending their nets, and he called them.
Mat 4:22  Immediately they left the boat and their father and followed him.

Mark 5:35-43
James, John, and Peter accompanying Jesus to the healing of Jairus's daughter.

Mar 5:35  While he was still speaking, there came from the ruler's house some who said, “Your daughter is dead. Why trouble the Teacher any further?”
Mar 5:36  But overhearing what they said, Jesus said to the ruler of the synagogue, “Do not fear, only believe.”
Mar 5:37  And he allowed no one to follow him except Peter and James and John the brother of James.
Mar 5:38  They came to the house of the ruler of the synagogue, and Jesus saw a commotion, people weeping and wailing loudly.
Mar 5:39  And when he had entered, he said to them, “Why are you making a commotion and weeping? The child is not dead but sleeping.”
Mar 5:40  And they laughed at him. But he put them all outside and took the child's father and mother and those who were with him and went in where the child was.
Mar 5:41  Taking her by the hand he said to her, “Talitha cumi,” which means, “Little girl, I say to you, arise.”
Mar 5:42  And immediately the girl got up and began walking (for she was twelve years of age), and they were immediately overcome with amazement.
Mar 5:43  And he strictly charged them that no one should know this, and told them to give her something to eat.

Luke 9:28-32
James, John, and Peter Witnessing the Transfiguration of Jesus.

Luk 9:28  Now about eight days after these sayings he took with him Peter and John and James and went up on the mountain to pray.
Luk 9:29  And as he was praying, the appearance of his face was altered, and his clothing became dazzling white.
Luk 9:30  And behold, two men were talking with him, Moses and Elijah,
Luk 9:31  who appeared in glory and spoke of his departure, which he was about to accomplish at Jerusalem.
Luk 9:32  Now Peter and those who were with him were heavy with sleep, but when they became fully awake they saw his glory and the two men who stood with him.
Luk 9:33  And as the men were parting from him, Peter said to Jesus, “Master, it is good that we are here. Let us make three tents, one for you and one for Moses and one for Elijah”—not knowing what he said.
Luk 9:34  As he was saying these things, a cloud came and overshadowed them, and they were afraid as they entered the cloud.
Luk 9:35  And a voice came out of the cloud, saying, “This is my Son, my Chosen One; listen to him!”
Luk 9:36  And when the voice had spoken, Jesus was found alone. And they kept silent and told no one in those days anything of what they had seen.

Luke 9:51-56
James and John desiring to bring fire down from heaven upon a Samaritan village.

Luk 9:51  When the days drew near for him to be taken up, he set his face to go to Jerusalem.
Luk 9:52  And he sent messengers ahead of him, who went and entered a village of the Samaritans, to make preparations for him.
Luk 9:53  But the people did not receive him, because his face was set toward Jerusalem.
Luk 9:54  And when his disciples James and John saw it, they said, “Lord, do you want us to tell fire to come down from heaven and consume them?”
Luk 9:55  But he turned and rebuked them.
Luk 9:56  And they went on to another village.

Matthew 20:20-28
Salome, the mother of James and his brother John, asking Jesus for special places of honor for her sons in heaven.

Mat 20:20  Then the mother of the sons of Zebedee came up to him with her sons, and kneeling before him she asked him for something.
Mat 20:21  And he said to her, “What do you want?” She said to him, “Say that these two sons of mine are to sit, one at your right hand and one at your left, in your kingdom.”
Mat 20:22  Jesus answered, “You do not know what you are asking. Are you able to drink the cup that I am to drink?” They said to him, “We are able.”
Mat 20:23  He said to them, “You will drink my cup, but to sit at my right hand and at my left is not mine to grant, but it is for those for whom it has been prepared by my Father.”
Mat 20:24  And when the ten heard it, they were indignant at the two brothers.
Mat 20:25  But Jesus called them to him and said, “You know that the rulers of the Gentiles lord it over them, and their great ones exercise authority over them.
Mat 20:26  It shall not be so among you. But whoever would be great among you must be your servant,
Mat 20:27  and whoever would be first among you must be your slave,
Mat 20:28  even as the Son of Man came not to be served but to serve, and to give his life as a ransom for many.”

Matthew 26:36-46
James, John, and Peter the closest to Jesus at Gethsemane.

Mat 26:36  Then Jesus went with them to a place called Gethsemane, and he said to his disciples, “Sit here, while I go over there and pray.”
Mat 26:37  And taking with him Peter and the two sons of Zebedee, he began to be sorrowful and troubled.
Mat 26:38  Then he said to them, “My soul is very sorrowful, even to death; remain here, and watch with me.”
Mat 26:39  And going a little farther he fell on his face and prayed, saying, “My Father, if it be possible, let this cup pass from me; nevertheless, not as I will, but as you will.”
Mat 26:40  And he came to the disciples and found them sleeping. And he said to Peter, “So, could you not watch with me one hour?
Mat 26:41  Watch and pray that you may not enter into temptation. The spirit indeed is willing, but the flesh is weak.”
Mat 26:42  Again, for the second time, he went away and prayed, “My Father, if this cannot pass unless I drink it, your will be done.”
Mat 26:43  And again he came and found them sleeping, for their eyes were heavy.
Mat 26:44  So, leaving them again, he went away and prayed for the third time, saying the same words again.
Mat 26:45  Then he came to the disciples and said to them, “Sleep and take your rest later on. See, the hour is at hand, and the Son of Man is betrayed into the hands of sinners.
Mat 26:46  Rise, let us be going; see, my betrayer is at hand.”

John 21:1-14
Jesus appearing to James and six other Apostles at the Sea of Tiberias.

Joh 21:1  After this Jesus revealed himself again to the disciples by the Sea of Tiberias, and he revealed himself in this way.
Joh 21:2  Simon Peter, Thomas (called the Twin), Nathanael of Cana in Galilee, the sons of Zebedee, and two others of his disciples were together.

Act 12:1  About that time Herod the king laid violent hands on some who belonged to the church.
Act 12:2  He killed James the brother of John with the sword,
Act 12:3  and when he saw that it pleased the Jews, he proceeded to arrest Peter also. This was during the days of Unleavened Bread.
Act 12:4  And when he had seized him, he put him in prison, delivering him over to four squads of soldiers to guard him, intending after the Passover to bring him out to the people.
Act 12:5  So Peter was kept in prison, but earnest prayer for him was made to God by the church.