Hey guys, this post is meant just for the elders, involved deacons, and potentially the insurance company.  It's about as easy to document things within this blog and share as anywhere else.  Rather than repeat the story every time for everyone who asks, the full story is right here.

So here we go.

How we feel:  The parsonage owned by Washington Church of Christ is a great home and we are grateful for it.  Even with the water damage now, it is no where near the amount of work we put into the old farm house in Tennessee!  So we're happy to help out in fixing this problem on the house and taking care of the congregation's investment.

Prior history - We moved in August of 2011.  We noticed water marks that had creeped up the dark wood panel wall boards around half of the den area, but assumed it was a problem that had been corrected as Mark Petty told us about a sump pump he had installed in the crawl space.  We have been grateful for that sump pump and Mark's work.

Within just a couple of months we had a pretty hard rain and noticed that the floor area in the den was a little damp, but didn't seem to be anything major.  We put fans on it and dried it out.

About twice a year, we would notice a little dampness and we would take efforts to dry it out.  During heavy rains I would go outside and try to figure out where the water was coming in.  I finally determined that the main problem was the water in the crawl space leaking into the den area.  The sump pump worked when the water rose several inches, but in really heavy rains, a little water was still seeping in.  I wanted to figure out how the water was getting in and prevent it.

Recent History - We did a little landscaping this year and noticed the mulch in front of the porch was getting washed from the south side of the house downhill toward the north side, meaning pretty significant water flow.

After a lot of study and thought, I determined that water was flowing from a downspout on the south side of the house, across the drive way, pooling up in the landscaped area, and seeping in underneath the porch.

The Rains Came Down - Then came the rains on Saturday October 6th and Sunday the 7th.  At about 7:30am on Sunday morning my wife noticed water "pouring" in from a new spot in the basement level.  Water was seeping from underneath the floor tiles in the bathroom near the sink.  The water was coming in too fast for us to sop up with towels and traveled all the way across the room.  We did our best before going to church and in between services to keep it at bay.  After church services we found half of the carpet in the den soaked with water soaking up the wall panels.

Here is video footage we took on Sunday, October 7th in the morning before church services:

The Cause - During my many visits outside I determined that there were two problems that created in increase in water.  First, the a grommet on the sump pump moved about an inch, which kept the sump pump from turning on.  I crawled under the house and fixed the problem here on Sunday afternoon, draining out the remaining water in the crawl space.  The second problem was with the new guttering.   The downspout put in front of the porch was pointed at a high spot in the yard.  The massive amount of water coming down in front of the porch was gushing out, hitting this "hill" and making a u-turn right at the front porch.  So our porch was receiving more water than ever before and the sump pump wasn't clearing out the crawl space in my opinion.  Double whammy.

The Dry Out Effort - We dried out for a week with fans, heater, and shop vac.  We also borrowed a carpet shampooer from the Tabers and after 5 days of drying out, we attempted to clean the carpet.  Ashley was surprised at the amount of "dirty" water coming out of the carpet.  She was also worried because she could still smell the moisture in the room if we shut the windows.  (Good thing we were blessed with good weather!)  On Sunday, October 13th, Coy Taber came over to look at the guttering and look at the damage.  He encouraged us and gave us permission to look behind the wall boards.  The budget committee at church approached us as well that day and offered to replace the flooring.

Christopher's Drain Work - The week prior to the 13th I purchased 10 feet of flexible drain pipe and 10 feet of PVC to direct all the water from the porch downspout to the north (low) side of the house.  It has a good slope in that area away from the home.  In small rains this week it seems to have directed the water exactly where we want it to go.

The First Panels - I finally pulled off the first two panels the next Saturday evening on October 19th.  I found black mold on the back side of the panel and on the dry wall behind.  I knew immediately more work than flooring would need to be done.  On Sunday afternoon the 20th, Drew Myers and Coy Taber visited to talk about what needed to be done to the room.  The determined that the panels needed to be pulled off, and the drywall ripped off at the 2 foot level and below for it to dry out.

Gutter Man - Mark Petty called Tri-State Guttering to come back out to change guttering.  On Monday the 21st the same installer came back out.  Instead of pulling much of the water down in front of the porch, he directed it toward the rear of the house where the ground has a better slope.  I put a 10' extender pipe on the bottom to move the water even farther away from the house.

Ripping Off - On Monday afternoon (Oct 21st) Scott Schnarr volunteered his time to help. We began ripping out carpet, pulling off panels, and tearing out drywall below 2 feet.  We found more mold, and moisture still existing below the 3 inch level all around this part of the wall.  The wood and drywall had to be removed.  Here are videos and pictures of what we found.
As you could see, there was plenty of mold, and rotted furring strip on the bottom.  Here are some photos as well. 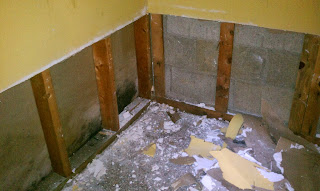 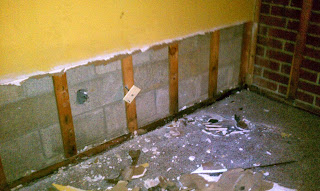 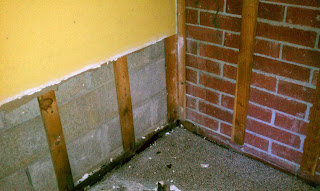 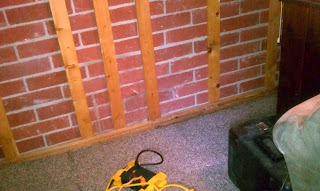 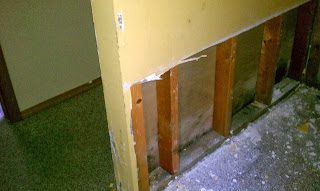 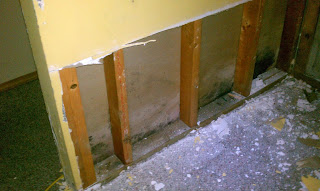 The Clean Up - Scott and I tried to scrape off all the mold we could find (with the room blocked off, fan in the window, and our dust masks on).  We rolled all the debri up in the carpet and threw it out the window into the trailer outside.  Then we swept up as much as we could.  I finished the night by spraying bleach all over all of the studs, furring strips, floor, and brick wall.  We left the fan on all night exporting the fumes out the window. (It got into the 30's overnight, brrr!)  This morning (the 22nd) I bleached it again we are still running the fan to dry it out.  Here's a video I shot of the cleaned up effort.

So that's where we are for now in the water damage saga.  I'm calling our State Farm insurance agent as well.  We plan to continue ripping out carpet this week and letting the room dry out.  We believe we have the problem remedied with the guttering and yardage drain.  We hope this information proves helpful!

at 12:09 PM
Email ThisBlogThis!Share to TwitterShare to FacebookShare to Pinterest